Share on FacebookShare on Twitter
Jessica Nabongo is many things: writer, blogger, entrepreneur, pub-lic speaker, travel influencer. She is also a woman, a Ugandan, and a first generation American. In February 2017, Nabongo was inspired to begin her journey to every country in the world, with 60 countries already under her belt. As of June 2019, she has visited 175 of 195 countries.
“Most things have already been done, but they have not been done by you. I am not the first person who is going to travel to every country in the world,” says Nabongo, who was greatly inspired by the journey of Cassie De Pecol — the fastest person and first woman on record to visit every country in the world.
For Nabongo, traveling has always been a lifestyle. “From a very early age, my parents opened up the world to me, and it was normalized,” says Nabongo, who first left her childhood home in Detroit at age four to travel abroad. “I’ve always wanted to visit every country in the world.”
She is often asked why she choose to embark on such a time-consuming, life- altering journey. “Number one, I wanted to do something that no one else has done. But beyond that, it is about representation. The travel space is super white and very male, so it’s important for me to do this,” says Nabongo, who wants to use her plat-form as an African woman to change the travel narrative.
“The world is not as scary as [the media] wants us to believe, and that is what I love about social media. I really want to change the narrative about the black traveler, and to show women, black people, and everyone else that you can do any-thing you want to do.” Riyadh. Saudia Arabia. Photo courtesy of Jessica Nabongo.
Nabongo says she often experiences judgement from others when she speaks about traveling to “controversial” countries such as Afghanistan, North Korea or Iraq, and what she does or does not see in those places.
“I am traveling to every country in the world,” she jokes. “North Korea is a country … I have never visited a prison in the United States, so why would I visit a labor camp in North Korea?”

“The world is not as scary as [the media] wants us to believe, and that is what I love about social media. I really want to change the narrative about the black traveler, and to show women, black people, and everyone else that you can do anything you want to do.”

Nabongo encourages travelers to keep an open mind and stop visiting places to affirm assumptions. “Travel with an open mind, not to confirm what you think you already know. And, stop taking advice from people who have never been there,” she says. “You can find beauty anywhere; it is how you choose to look at places.” Yazd, Iran. Photos courtesy of Jessica Nabongo.
“I love using my platform to help teach people about the world, and also to break down these stereotypes and ideas that people have about different countries,” she adds.
Nabongo talks about understanding the “power of a post” and trying to use her “influence for things that matter,” such as changing the narrative about black and brown countries, advocating toward the reduction of single-use plastic, and empow-ering women to travel freely. 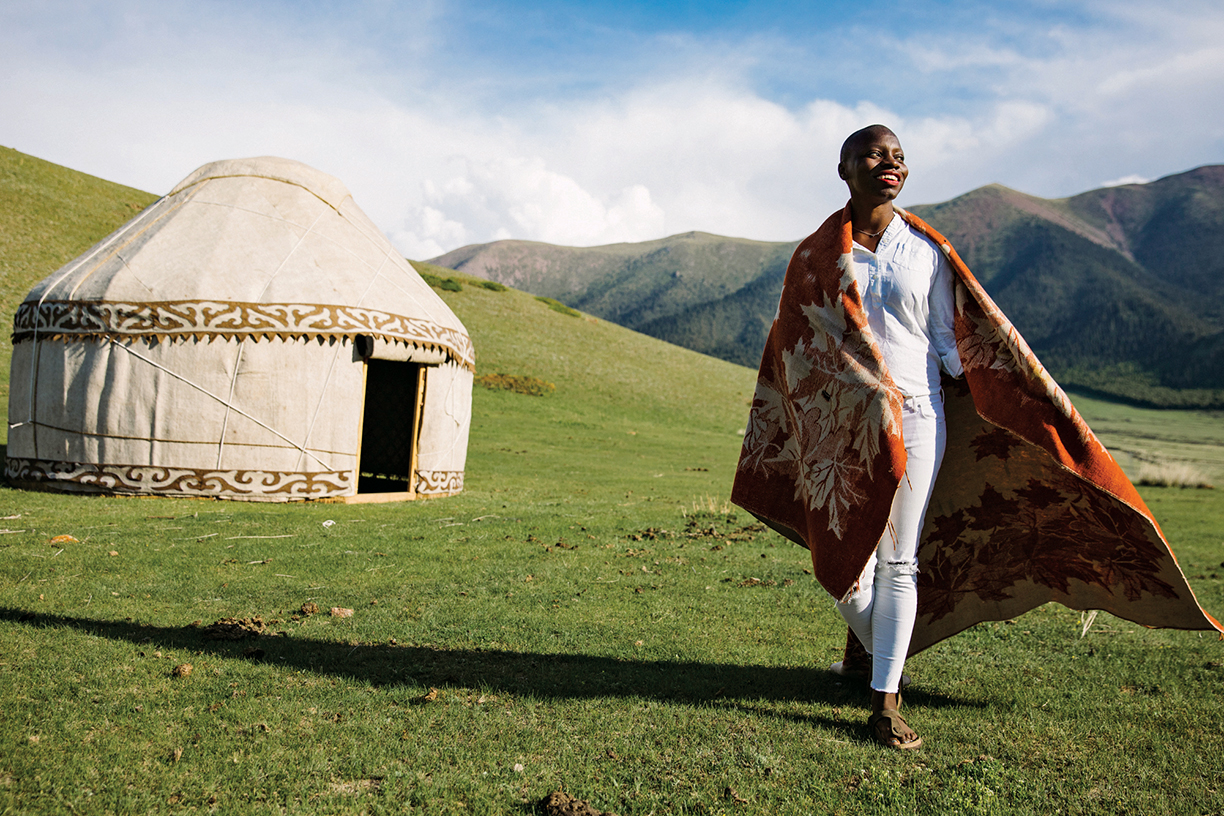 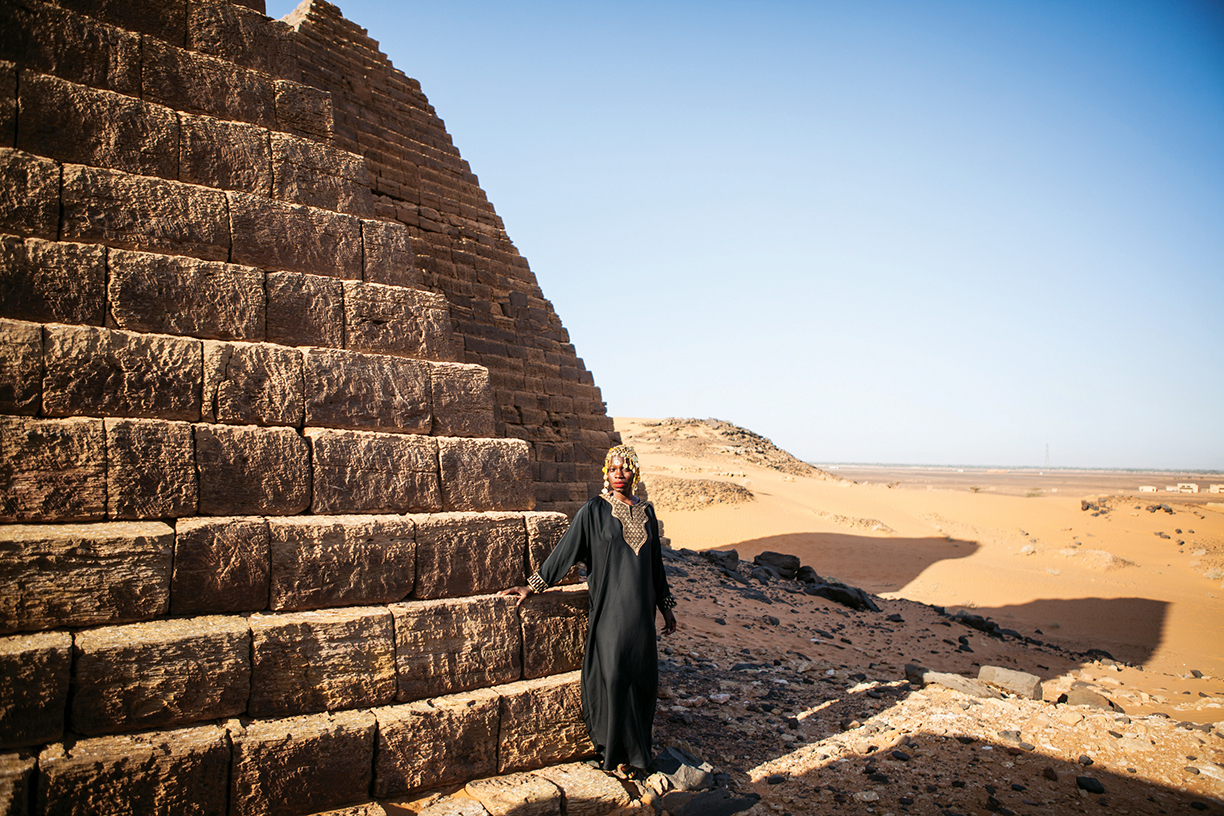 Meroë, Sudan. Photo courtesy of Elkhair Balla.
Nabongo talks about understanding the “power of a post” and trying to use her “influence for things that matter,” such as changing the narrative about black and brown countries, advocating toward the reduction of single-use plastic, and empowering women to travel freely.
“I am not here to convince anyone to travel to every country in the world, because it is ridiculous,” she jokes, “but what I do want people to get from this story and this journey is that your dreams are valid. Dream big, make a plan and go after your dreams.”
Nabongo, referred to as The Catch Me if You Can on social media, tries to paint each country she visits in a positive light, while prioritizing honesty. “If there is going to be a single story, I believe that that single story should skew positive, especially about a country that is not my own…. Maybe I didn’t like a country, but that is not a reflection of what your experience will be.”
Ultimately, the biggest lesson Nabongo has learned: “people are mostly good.”
With horrific things happening around the world everyday, Nabongo acknowledges that it can be difficult to find the positivity in everyday life. “There are all of these negative things going on in the world, and it can really make people feel depressed… The fact of the matter is, 99 percent of my travel experiences are positive. I move through the world with positive energy, therefore I attract positive things to me.” 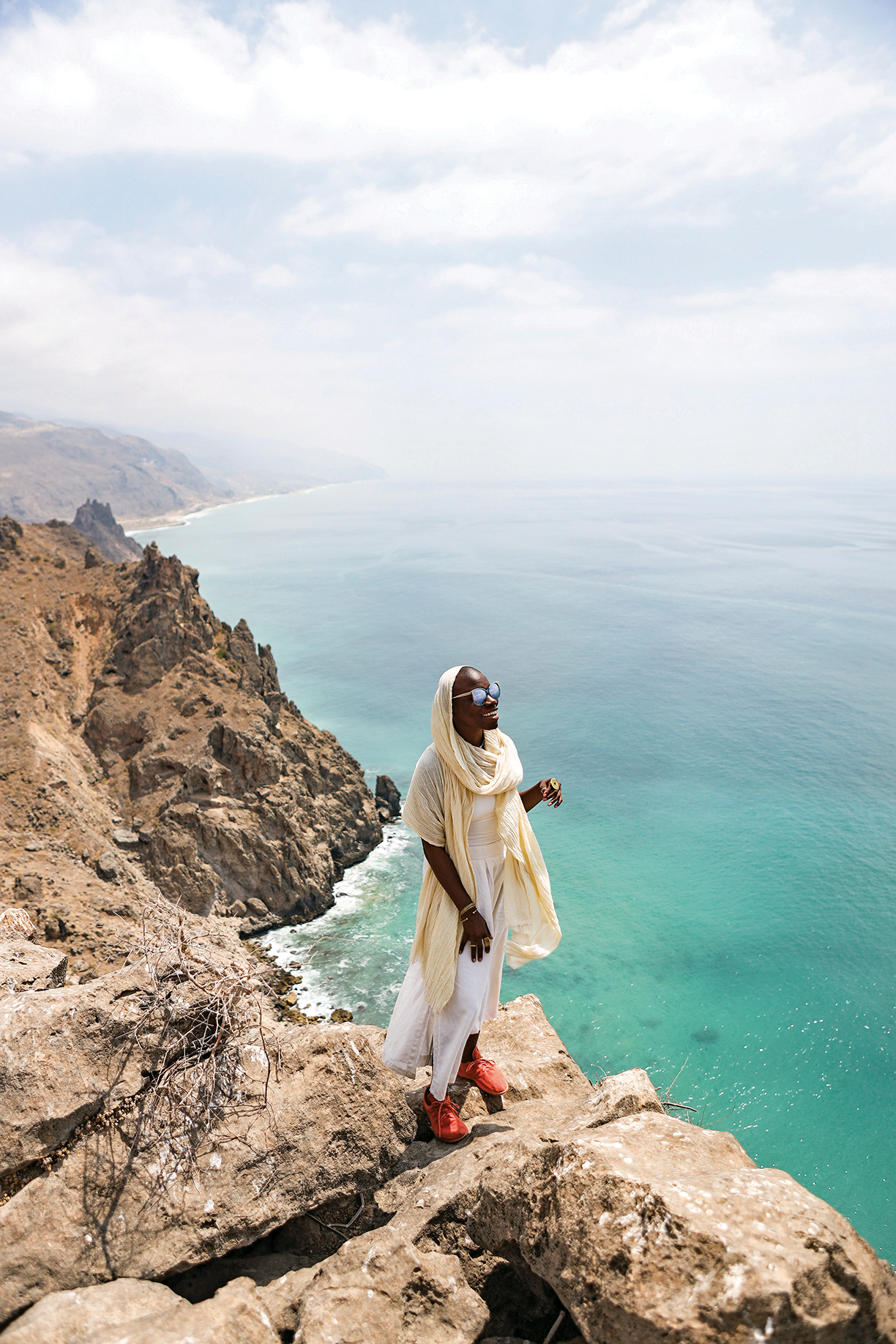 Armenia. Photo courtesy of Elton Anderson.
Whether it’s borrowing cell phones in Nepal, or asking for directions in Japan, Nabongo says strangers are “always” ready to help her. “I have too many examples of the kindness of people during my travels,” she says.
With less than 20 countries remain-ing, Nabongo hopes to end her journey on October 6, 2019 in the Seychelles, on her father’s birthday to celebrate his memory.
Reflecting upon her journey, Nabongo notes that being an entrepreneur has proved a challenge, often testing her strength and dedication. Nabongo advises, “Whatever it is you are seeking, whatever it is you are creating, be careful not to quit too soon.”
8 Rules for Life, From Jessica Nabongo

*As of October 7th, 2019, Jessica Nabongo had reached her final goal of traveling to every country in the world, finishing her list in Seychelles.