Many contemporary luxury watches are inspired by the sleek aesthetics and seductive instrumentation of the automobile and aerospace industries, resulting in endorsement deals with Formula One drivers and marketing campaigns featuring test pilots. Some of the high-tech materials that make sports cars and fighter jets lightweight and aerodynamic are now incorporated into watches.

For many consumer products, there is a correlation between weight and value, a concept manufacturers have, sometimes misleadingly, reinforced. Watchmakers, whose sleek, svelte products have evolved into large, chunky ornaments per current style, have been forced to explore the use of lighter materials. Now the ethereal is being equated with value, and the race to lightness has produced some remarkable products. 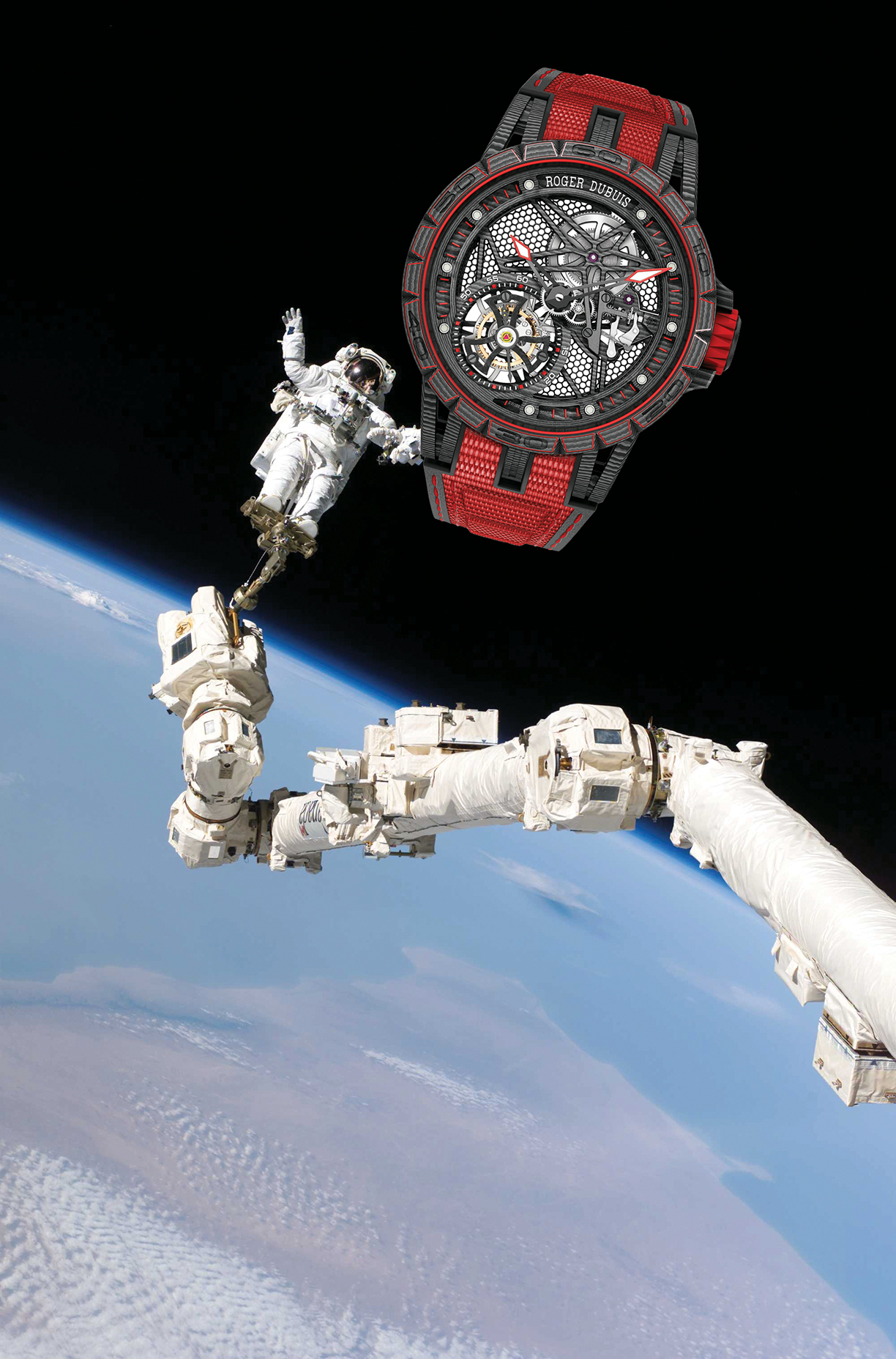 Several lightweight watches later, Richard Mille introduced the RM 50-03 McClaren F1 model in 2017, a limited edition of 75 pieces priced at $980,000. At less than 40 grams (including the strap), it became the world’s lightest split-seconds chronograph tourbillon watch. That product introduced a new nanomaterial called graphene (aka Graph TPT) that is 200 times stronger than steel but far lighter. Noting watchmakers’ proclivity to mimic machines on the race track, Adams suggests, “Timepieces are often referred to by modern watchmakers, including Richard Mille, as ‘race cars for the wrist.’”

Lightweight materials like carbon fiber and titanium have been adopted by manufacturers of mass-produced watches, brands such as Citizen and Casio, but luxury watchmakers are consistently pioneering newer, lighter materials. The carbon nano-fibers employed by Richard Mille are similar to what are used for the U.S. Air Force’s stealth bombers, and graphene is being tested by McClaren for its Grand Prix race cars. “I’ve worn many lightweight Richard Mille watches and they’re very cool,” reports Adams. “The irony is that the more lightweight they are, the more difficult it can be to present them as the mega-luxury products their prices suggest,” he adds.

Ariel Adams, whose A Blog to Watch is a leading resource for watch enthusiasts, reports, “Watch brands typically are poor at selling anything new, and thus rely on other products and industries who have already created an appetite for particular materials or themes.” He cites comfort as a prime motivation for reducing weight, stating, “There’s a very real reason why a collector might prefer to wear a watch that’s barely noticeable as opposed to a ‘gold brick on the wrist.’”

Nancy Olson, managing editor at Inter-national Watch (iW) magazine, reports, “It’s all about expanding the limits of development and design to set themselves apart within a somewhat crowded watch market, as well as, in this instance, sturdiness and comfort—particularly in the sport watch arena.” Richard Mille, arguably the trendiest brand in watches, is particularly inﬂuential in sport-themed design.

At the French Open in 2010 Richard Mille debuted the RM 027 tourbillon watch, a limited edition designed for tennis superstar and brand ambassador Rafael Nadal. Able to withstand the violent gravitational forces he produces on the clay court, the watch weighs a mere 19 grams (0.670 ounces) with its strap, thanks to a carbon-based composite. The entire movement, crafted from titanium and a high-lithium content alloy — the light yet durable lithium is used in aircraft, rockets and race cars — weighs just 3.83 grams (0.135 ounces). 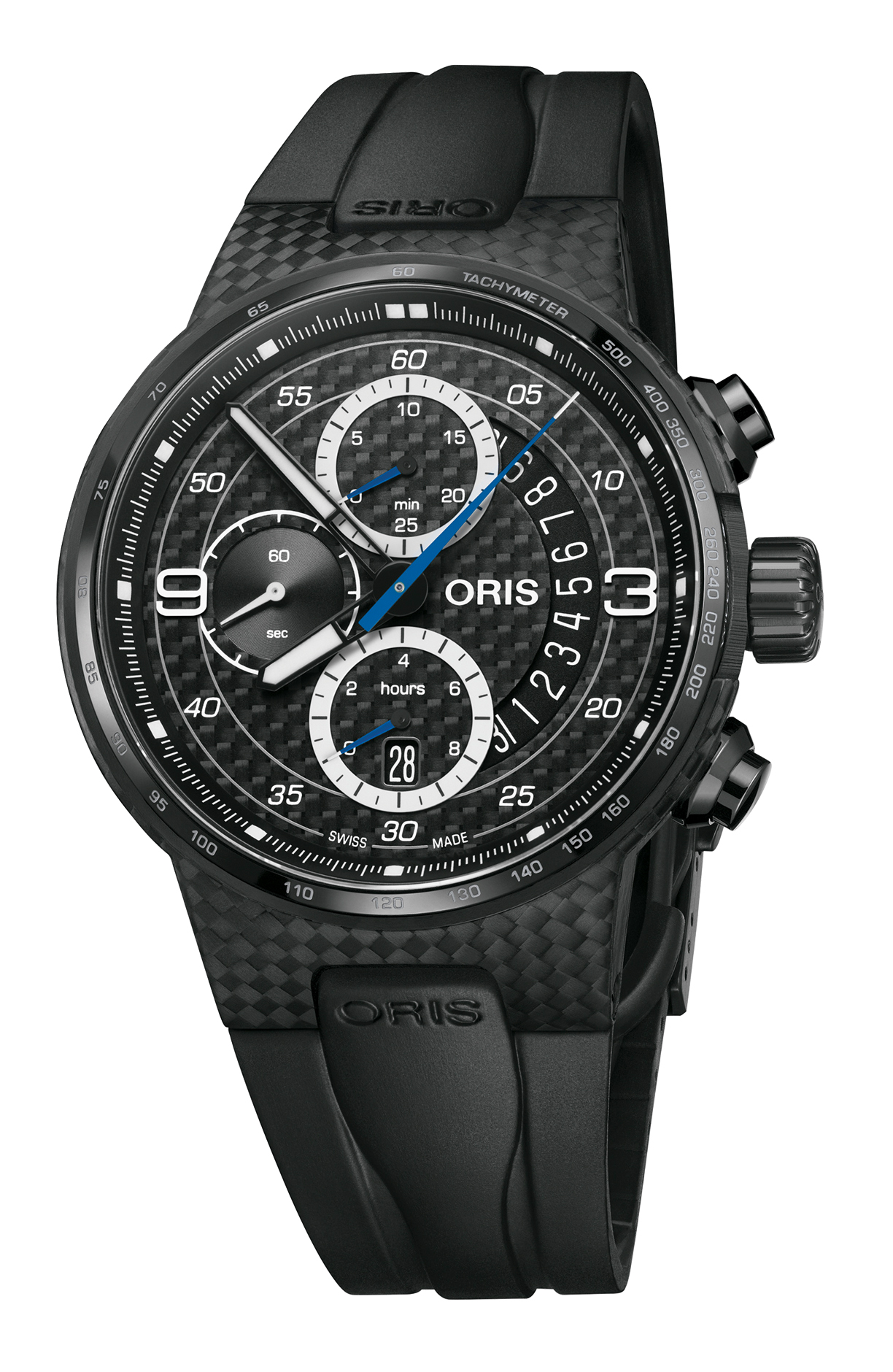 Richard Mille is not the only manufacturer with a connection to auto racing, and the FW41 from Oris is part of a racing-themed collection that celebrated the Williams Team’s 41st season on the Formula One circuit. The total weight of this limited edition watch, comprised largely of carbon fiber and titanium, is not disclosed but the middle case weighs in at only 7.2 grams (0.254 ounces).

Known for capitalizing on trends set by more expensive watchmakers, Oris brings greater accessibility to feather-weight watches, as the FW41 costs approximately $4,350. With its patterned black carbon fiber dial, the FW41 has a dark, sultry aesthetic, reminiscent of the aircraft that share the same materials. Roger Dubuis, which frequently collaborates with iconic racing brands Lamborghini and Pirelli, uses carbon and titanium to lighten its skeleton-style Excalibur Spider watches, both an automatic model and ﬂying tourbillon. Montblanc, the legendary German manufacturer of writing instruments, is also a superb watchmaker and in 2016 it released a concept watch, the Time-Walker Pythagore Ultra-Light that weighed in at an extraordinary 14.88 grams (0.525 ounces) sans the strap. Montblanc achieved this lightness through skeletonization and the use of mineral glass, titanium and a Swiss composite material charged with car-bon nanotubes called Innovative Technical Revolutionary Resin.

For those who value a thin profile even more than lightness, the crown would go to Bulgari, which at Baselworld 2019 — the celebrated timepiece/jewelry exhibition held in Switzerland every spring — debuted the thinnest automatic wristwatch in the world. The venerable Italian brand has long specialized in ultra-thin watches and with a 3.3mm movement housed in a case just 6.9mm thick, Bulgari’s razor-thin Octo Finissimo Chronograph GMT is the company’s latest achievement in condensing complex mechanisms.

Ariel Adams cautions that thin watch engineering differs from lightweight watch engineering in significant ways. “Thin watches tend to be a lot more diffcult to make because you aren’t just working with materials but also tolerances and moving parts that need to go next to one another,” he explains. While the Octo Finis simo secures a new title for Bulgari, Piaget (another specialist in slender timepieces) holds the record for mechanical watches. “While thin watches can also be lightweight, appreciating the effort that’s required to make them is an entirely different discussion,” insists Adams.

Nancy Olson, who professionally observes the often-fickle trends in watch-making, does not dismiss the ﬂight-to-light or thin-is-in movements. “A trend always leaves something behind, even when the expression of it evolves,” she states, adding, “Every milestone in watchmaking changes the whole in some way.”

A Blog to Watch- www.ablogtowatch.com 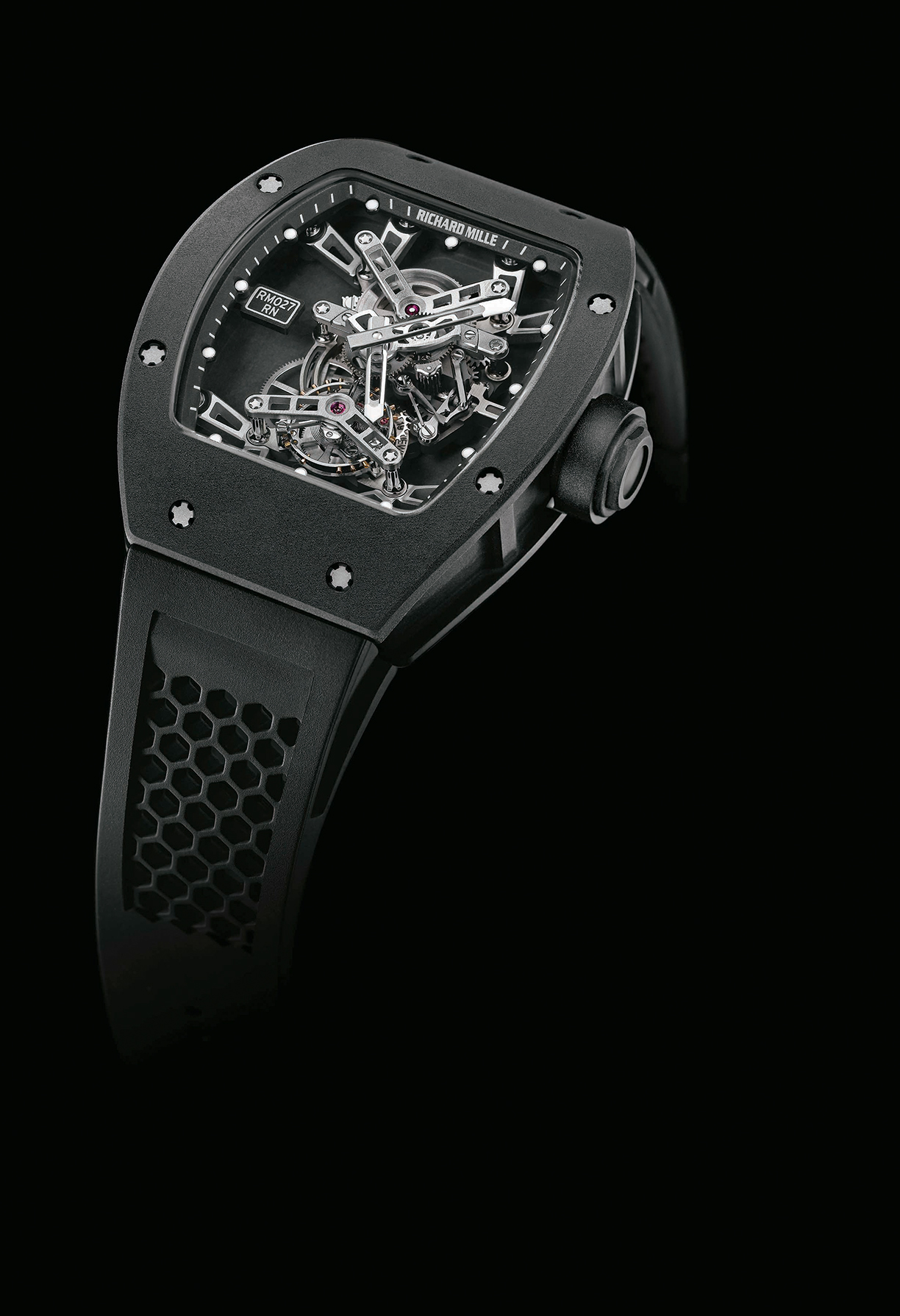 The Run To Ibiza

Roger Dubuis has created “The Run To…,” a series of extraordinary supercar adventures, with the signature drive concluding at the Monaco Grand Prix. Participants pass through unrivaled natural beauty in the world’s finest automobiles, enhanced with fine cuisine, lavish accommodations and world-class entertainment. The glamour of these journeys fuel the company’s inspired watchmaking. Photo courtesy of The Good Life Inc.