Surfing has always been one of the most approachable, laid-back sports in the world, with no cost to entry beyond access to a public beach, a second-hand board and a pocketful of change for an after-wipeout ﬁsh taco. But with iconic luxury brands like Louis Vuitton and Hermès creating boards for their exclusive clienteles, another side to the sport has emerged.

Among the most striking boards available are those from Haleiwa Surfboard Company, at which septuagenarian surfer and veteran artisan Mahlon (“Lon”) Klein typically crafts no more than 15 exquisite wooden boards per year. Located on Oahu’s North Shore, one of Hawaii’s most storied surfing destinations, Haleiwa incorporates indigenous hardwoods such as koa, mango, kamani, and monkey-pod into its unique boards. 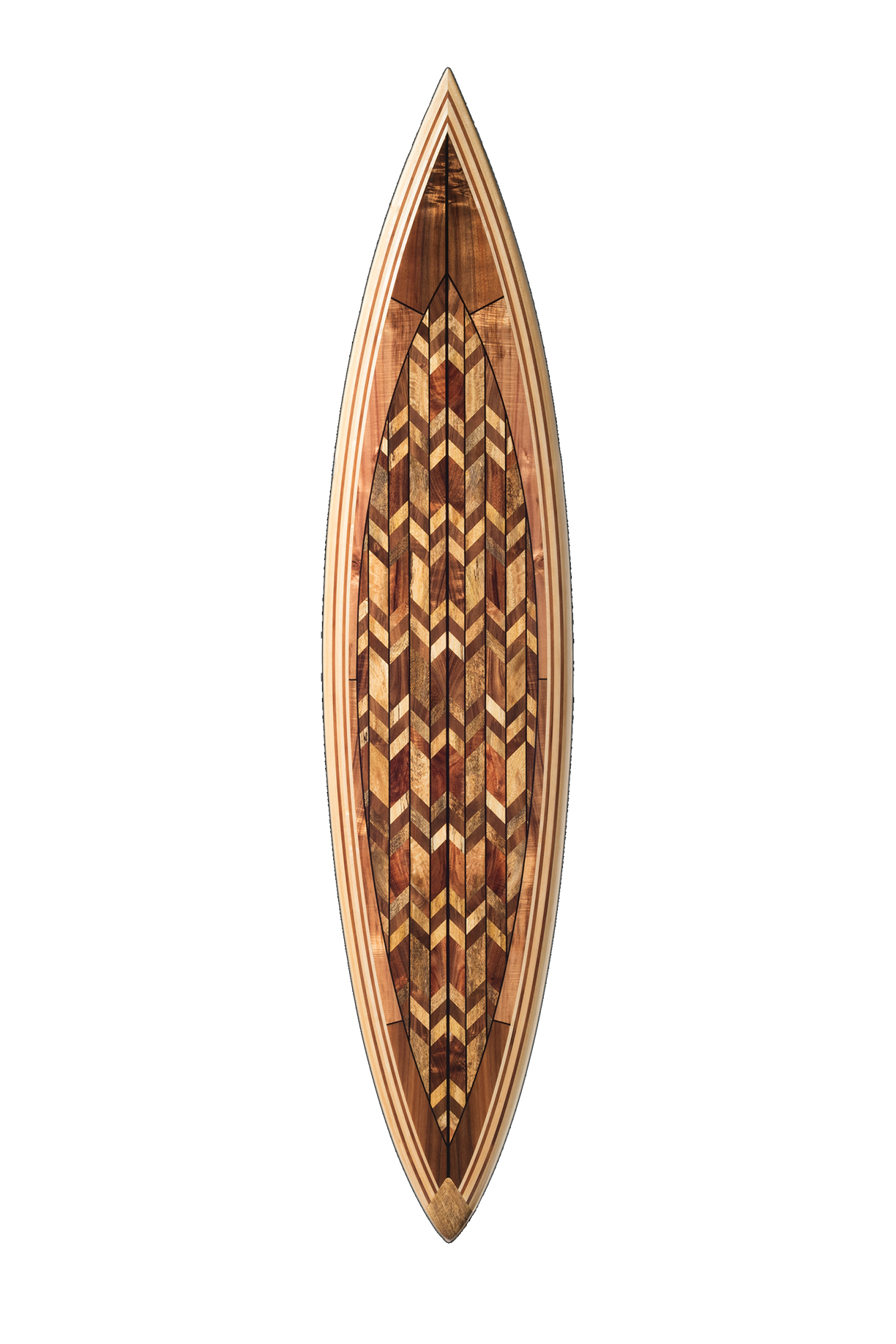 Klein originally began crafting boards from lightweight woods, and some are used to this day by pro surfers Michael Ho and Roger Erickson, but he eventually sought out more attractive woods that are too heavy for competitive surﬁng. “My audience was no longer the surﬁng market but the art market,” explains Klein, who insists no two of his boards are alike. “I never thought of myself as an artist,” says the native Californian who moved to Hawaii for the surﬁng. “But I’m always trying to accentuate the beauty of the shape itself,” he adds.

Klein says that more than 200 hours of labor go into each handcrafted, triple-gloss-ﬁnished board, and the artisan has no interest in compromising his craft for mass-production. Haleiwa Surfboard Company’s worldwide following includes clients from Europe to Japan, and Klein reports that a member of the Moroccan royal family purchased a pair of the wood-clad “sticks.” The ﬁrm’s larger surf-boards are currently priced at $22,000 while a shorter ver-sion commands $14,000.

Far from the iconic beaches of Hawaii or California is England’s LUX Surfboards, a collaboration of Ellie Miller, the only female professional board maker in Europe, and artist Danni Bradford. “The Aureus,” is their ’70s-inspired board, entirely sheathed in 24-karat gold leaf and currently priced at the equivalent of $45,600. The deck features a triple elliptical pinline design and the hull includes a single gilded ﬁberglass ﬁn.

“A 24-karat gold surfboard had never been made before, and we were inspired by how unique it would be if we could achieve it,” says Bradford, whose studio is close to her favorite surﬁ ng spot in North Devon. “I’ve been riding Ellie’s surfboards exclusively for the last six years, and watching her grow as maker,” says Bradford, who adds, “It seemed only natural for us to combine our skills.”

“The board took months to complete, and it was incredibly painstaking,” says Bradford, who explains the gold was integrated into the construction of the board, not simply applied to the surface. The artist, acclaimed for her imaginative work with glass, says of her partnership with Miller, “I deﬁnitely think we’ll collaborate again on another board.”

In Los Angeles, designer Elisabeth Weinstock covers everything from handbags to soccer balls in exotic anaconda or boa skins. Her surfboards ($5,600), clad in snakeskin or other exotic leathers, are popular even with people who never venture into the waves. “Whether you’re a surf enthusiast or just appreciate the California beach vibe, this is the ultimate luxury objet d’art,” says Weinstock, who notes, “It was designed for the lover of the art of the sport.”

Kelly Wearstler, a prominent L.A. interior designer known for her trendy Holly-wood Regency- or Art Deco-in-spired hotel commissions, has also waded into surfboard design. Handcrafted from shaved Russian birch and sealed with surf resin, her $8,900 boards display compel-ling patterns, some organic and others more structured, that bring artistic expression to the sport. While you could conceivably paddle out on one of these glossy boards, they are primarily decorative, designed to bring the spirit of surﬁng indoors. Wearstler reports they were inspired by her love of the Malibu beach culture. Hawaiian artist Tim Nguyen, whose idyllic images of his fellow Islanders are expressed with rich tropical colors reminiscent of Impressionist painter Paul Gauguin, presents his love of the Aloha State on a surfboard. His “Under Banana Leaves,” currently offered at specialty retailer Martin & MacArthur for $8,190, is the ideal piece of décor for a luxury Hawaiian estate — or even a Chicago penthouse whose owner yearns for the Maui sun.

“Art on surfboards is my expression of Island beauty, my passion for the ocean and the depiction of Hawaiian culture,” says Nguyen, who resides on the tranquil, unspoiled west side of Oahu where local traditions endure. “My board represents a scene in my imagination about a lush tropical garden,” reports the artist, whose frequent images of banana trees capture the magical qualities of Polynesian culture. 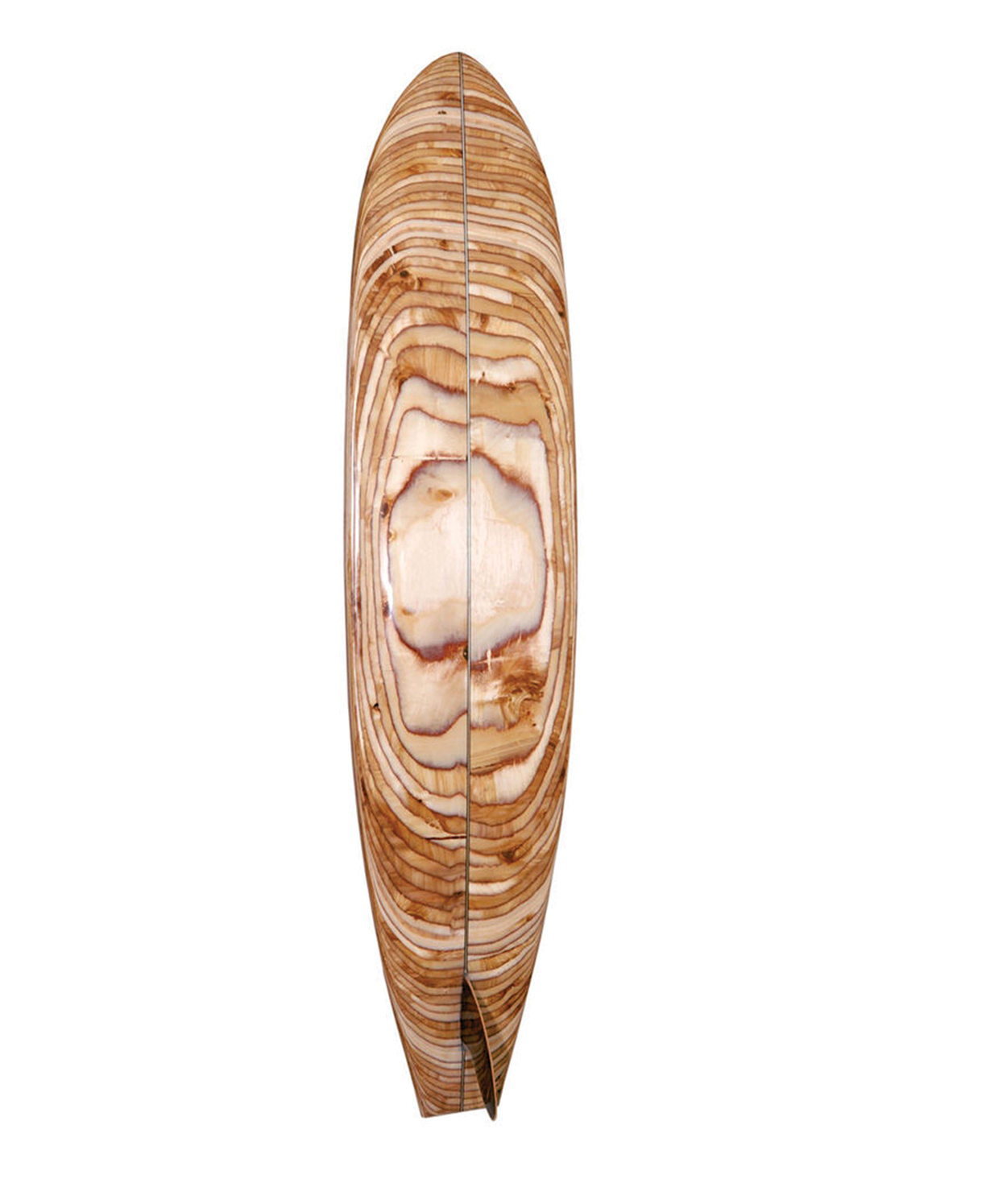 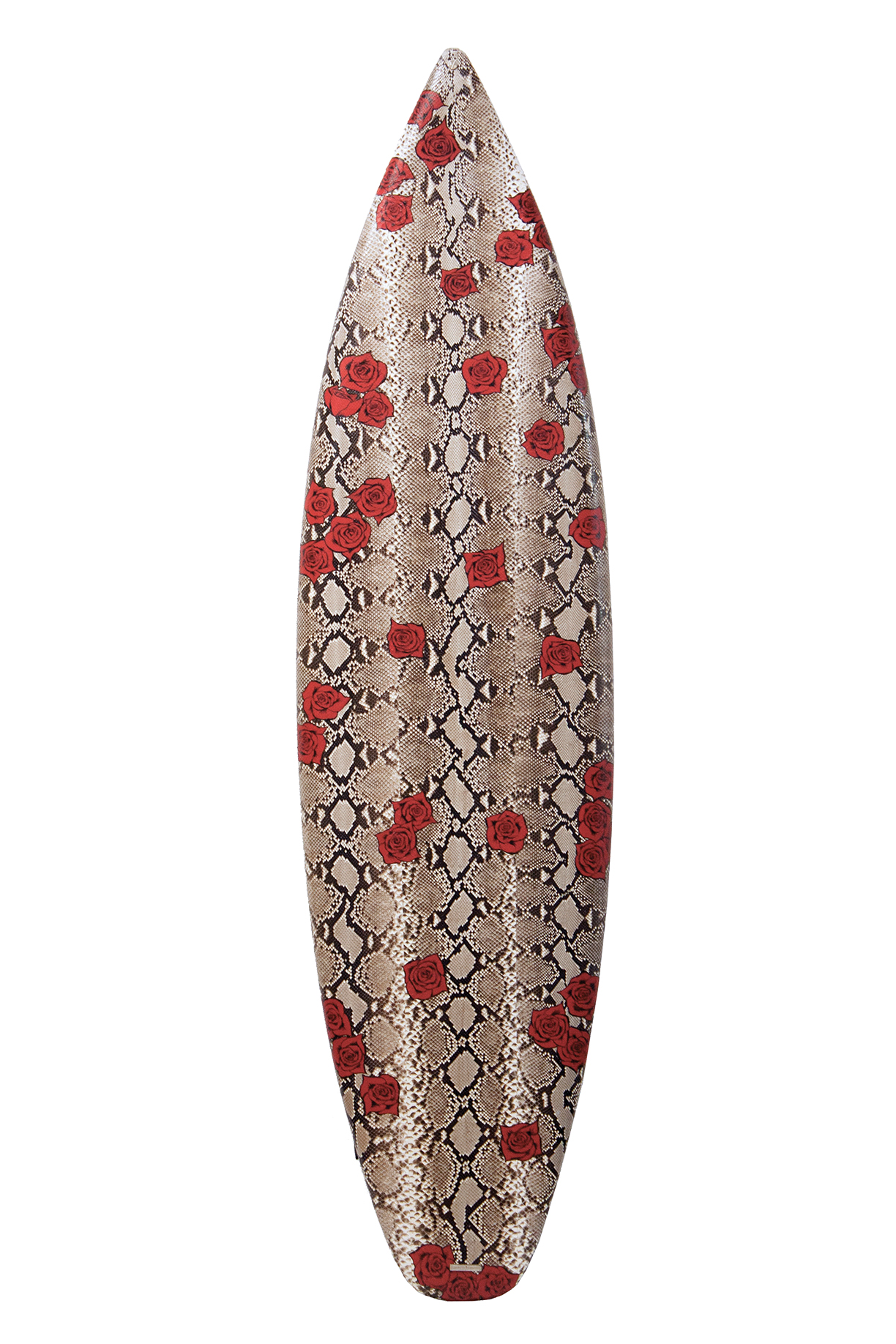 The most expensive surf-board on record was created by New Zealand designer Roy Stuart in 2014 and priced at $1.3 million. The board, named “Rampant” was crafted from paulownia, an Asian tree known for lavender-colored blossoms and has a 23-karat gold lion emblem engraved into it. The hull of the board has a unique tunnel-shaped fin created from kahikatea wood, a towering tree native to New Zealand, along with a distinctive neon blue polycarbonate ﬁn for further balance. In addition to iconic fashion labels delving into surf culture — Chanel currently offers an elegant board for $8,900 — auto manufacturers like Peugeot and Tesla have also applied their distinctive style and engineering to the once-pedestrian boards. Mercedes-Benz created the “Silver Arrow of the Seas,” an aerodynamic carbon-ﬁber board with the sleek good looks of a sports car, tailor-made for monster wave master Garrett McNamara. In 2014, the legendary surfer used the board to ride some of the most enormous waves on record off the coast of Nazaré, Portugal.