Slick, a native of Hawaii, painted this mural on the exterior of the Museum of Graffiti in Miami.

Its earliest practitioners were considered criminals, but now the work of some graffiti artists hangs in the nation’s most prestigious museums.

After society’s initial outrage over acts of vandalism in the name of creativity, art enthusiasts begrudgingly acknowledged that some wayward, urban painters were genuinely gifted. Over time, graffiti and street art earned a place in prestigious collections, private galleries and museums like the Museum of
Contemporary Art (MOCA) in Los Angeles and Whitney Museum of American Art in New York.

While graffiti is often viewed as an American-born genre, Michael Rooks, a curator of modern and contemporary art at Atlanta’s High Museum of Art, provides some historical context. “Graffiti and street art have their origins in the history of 20th century art — from Dada wherein text replaced image to inveigh against WWI on the streets of Zürich, to the Mexican muralist movement’s large-scale murals in post-revolution Mexico City, to Les Affichistes artists whose affiches lacérées (layers of torn posters and advertisements) were literally sourced from the streets and walls of post-WWII Paris.”

The evolution of American street art has been well documented in L.A. and New York, but the acceptance of this form of artistic expression has also occurred in Philadelphia, Miami, Chicago, and San Francisco. 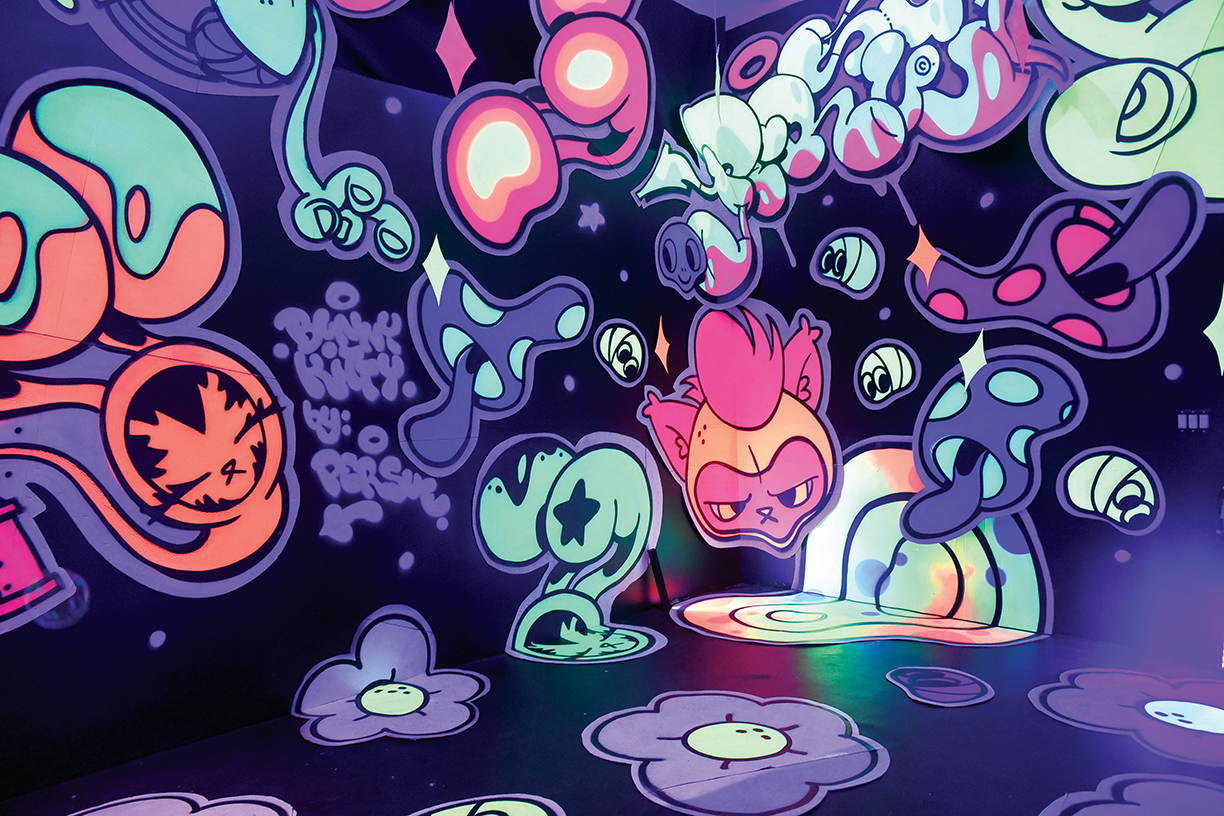 Some street artists are commissioned as muralists, a transition that monetizes and legitimizes their work, before eventually being discovered by curators. Ultimately, gallery representation leads to their art appearing in chic restaurants, hotels and private collections. Artists like Keith Haring, Jean-Michel Basquiat and Shepard Fairey — all once confined to the fringes of the art world — became creative celebrities. In L.A., the exclusive fashion boutique of Elyse Walker features artwork by RETNA, one of the most prominent local street artists, while superchef David Chang hangs the work of David Choe in Majordomo, his popular downtown restaurant. The city’s Mayfair Hotel features the work of a different street artist on every floor — resulting in diverse visual experiences for guests — and is a tribute to the depth of talent in the region.

The historic Mayfair, site of the first post-Academy Awards party in 1929, has been transformed into a trendy setting showcasing street art, curated by artist-in-residence Kelly “RISK” Graval. The Louisiana-born artist became one of L.A.’s most influential graffiti stylists and was among the pioneering artists to transition from the street to the gallery, as well as entering the worlds of fashion design and music video.

RISK’s own work is represented by a Buddha-inspired installation on the second floor and one of his murals will eventually soar above the 15th-floor pool deck. “I selected my “Metallic Tissue” series, which consists of a body of work that I paint on panels built out of repurposed spray cans,” reports RISK, who states, “They’re my imprint on society as an artist, my DNA.” He also installed some of his unique neon work in the lobby, which suits the vintage of the building. Overall, nearly 100 pieces throughout the hotel represent the diversity of L.A.-based graffiti artists and muralists like DEFER, Billy Morrison and Shepard Fairey, whose breakout work was the Barack Obama “Hope” imagery from the 2008 presidential campaign.

“There was a time when graffiti artists were a small underground subculture,” explains RISK, but adds, “The powerfully dynamic art sparked a younger generation and it exploded.” He acknowledges that street art festivals and museum exhibits helped elevate the genre within the polite corridors of the art world, but that true recognition has been stubborn. 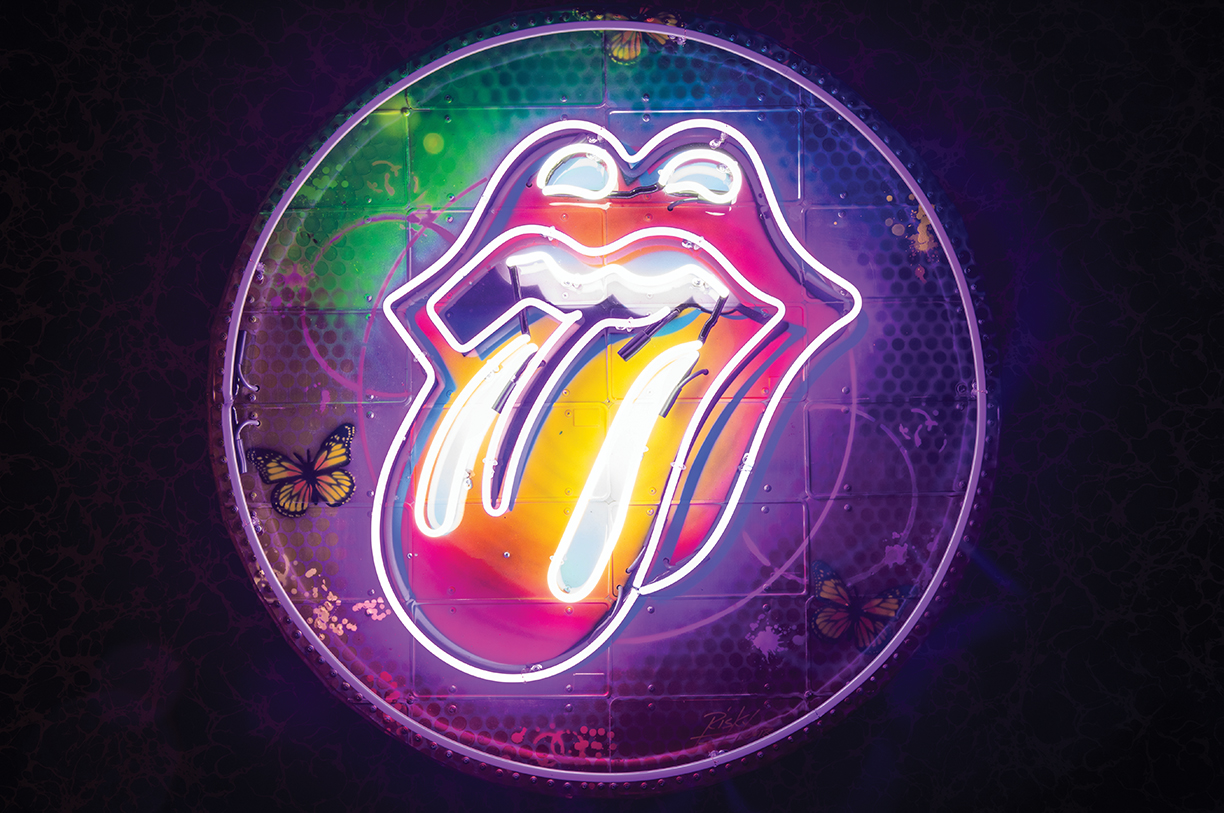 “It was time for a new generation to take over. The old guard and practices of art began to change,” insists RISK, who suggests progressive hoteliers are helping idiosyncratic artists to find an audience. “Hotel art was becoming stale, kind of like Muzak in elevators in the ’80s, and needed a new approach,” says the veteran artist. “Boutique hotels like The Mayfair are ahead of the curve and breathe fresh air into an exciting future for art, artists, and art enthusiasts,” says RISK.

Roger Gastman, an urban anthropologist and historian, is a leading authority on street art who counts The History of American Graffiti and Street World: Urban Art and Culture from Five Continents among his 50 books. Gastman remembers his own discovery of self-expression — through a spray paint can in the early 1990s — as a defining moment in his young life.

Gastman, whose first book, Free Agents: A History of Washington, D.C. Graffiti, documented the local culture he experienced in his youth, reports there is a distinction between graffiti and street art. “Graffiti is very name-based, very ego-driven, while street art is more image-based and involves additional tools and techniques,” says Gastman, but notes that both have their roots in vandalism. “Street art is a safer name and is more digestible to the public, but graffiti and street art are kissing cousins on the same playing field,” he muses.

“So much of this work is fantastic and deserves to be seen in a different light, collected and respected,” says Gastman, who laments, “A majority of galleries and museums still don’t accept this kind of art, look at it seriously or believe it should be shown.” Demographics, however, are driving attitudes, suggests Gastman. “People in their 30s and 40s grew up with graffiti, tattooing and skateboarding — it’s everywhere, in fashion, music and advertising — and it resonates with them.”

Last year, Gastman spearheaded the New York edition of Beyond the Streets, a massive 100,000-square-foot exhibition of prominent graffiti artists in Brooklyn, following a similar event in L.A. in 2018. “We basically built our own museum and 200,000 people walked through the doors,” he explains, adding, “It showcased graffiti and street artists, giving them respect and presenting their history in the proper light.”

Miami, whose Wynwood Arts District is defined by vibrant, multicultural murals, is a city with a strong tradition of street art, and its Museum of Graffiti pays homage to the approachable medium. Museum co-founder Allison Freidin explains, “Our goal is to celebrate a group of artists previously marginalized because of the stigma associated with graffiti,” and reports the Miami institution is the only one in the world exclusively dedicated to graffiti art. “Previously, there was no place to learn about these artists,” she adds. 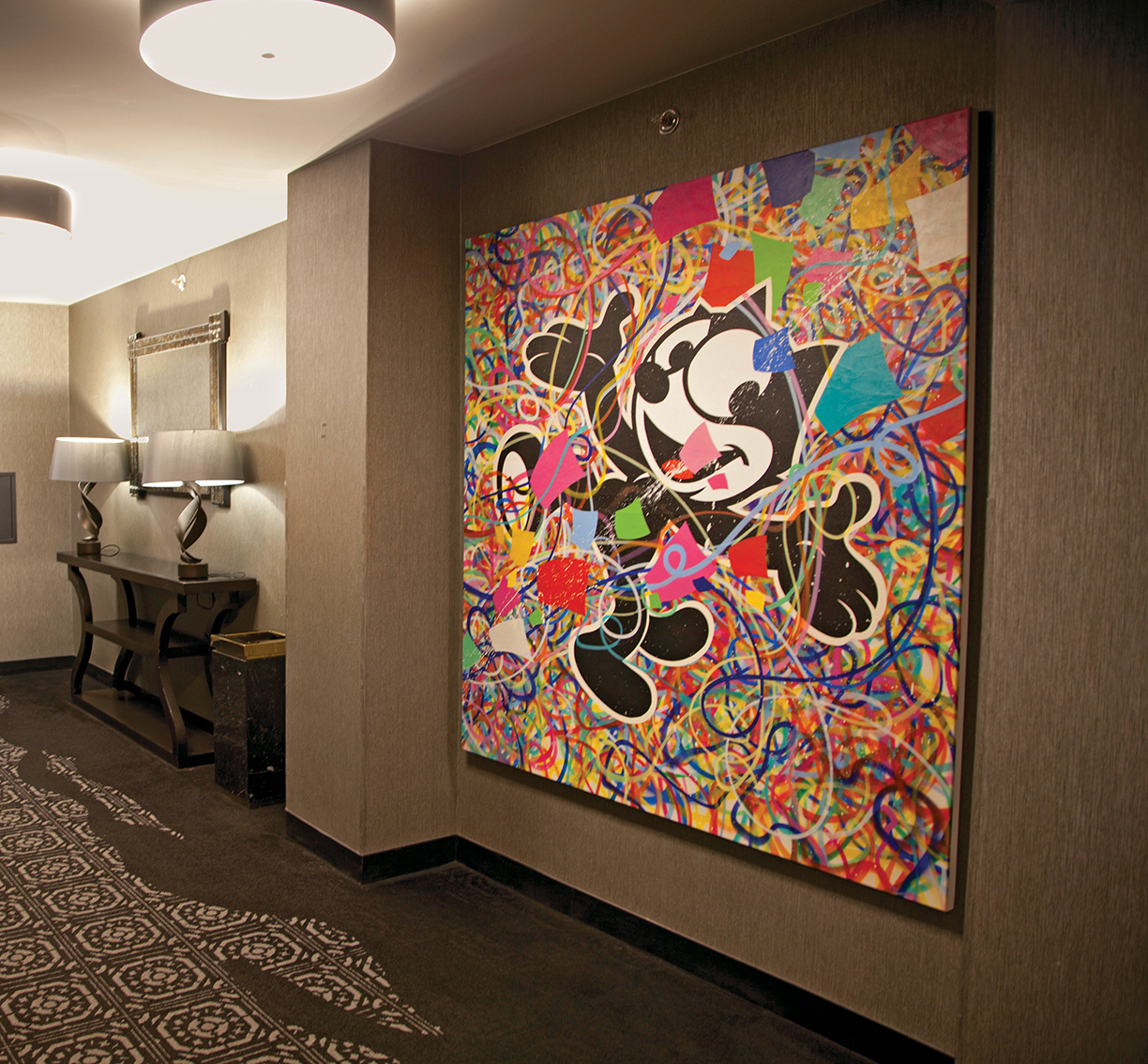 Explaining its location in a former shoe warehouse in Wynwood, Freidin reports, “The district’s relevance in the past 10 years is a product of the graffiti art that transformed a sleepy industrial neighborhood into the world-class arts destination it has become,” noting the windowless warehouses made ideal canvases for street artists. The Museum of Graffiti’s own building is entirely wrapped in 14 different murals by acclaimed local and international artists like Shoe, EZO and Abstrk.

The museum’s interior galleries feature rotating exhibits such as a recent compelling vignette from artist Persue, who famously removed the “Wet Paint” signs that New York City transit workers used to tape to subway cars after painting over graffiti art. Persue sent more than 70 of those very placards to artists around the world to use as canvases, all of which were incorporated into an exhibit whose physical design resembled a New York subway station platform.

Freidin explains that Miami’s graffiti art movement began in the early 1980s when some youth who got into trouble in New York were sent to South Florida to live with grandmothers or aunts. Insisting there is no way to repress the energies of an artist, Freidin reports, “The art erupted like a vengeance.”

The museum co-founder applauds the success of local graffiti artists like José Parlá, whose work moved from the streets of Miami to a mural inside Manhattan’s One World Trade Center, as well as multiple museum exhibitions and commissions in Tokyo, London and Havana. “He was immensely talented and continued to put in the work despite the stigma associated with graffiti art as vandalism,” says Freidin, who adds, “He’s probably one of the biggest names in contemporary art in the world.”

It was not easy for some museum curators to persuade their boards of directors that people previously labeled as vandals should be showcased in world-class fine arts facilities, but Freidin maintains society has evolved. She offers the former criminalization of marijuana as an analogy, citing its progression from disdain to broad acceptance. “It takes forward-thinking arts enthusiasts to take a risk,” and reports major corporations are hiring these artists as creative directors. “They recognize the power of this art,” says Freidin.

Robert Michael Provenzano, professionally known as CES, is a leading graffiti stylist whose signature aesthetic is now influencing the generation of artists currently emerging from the streets. His art, which began almost 40 years ago in his native Bronx, repeatedly got him into trouble as a young man, but after being flown to Munich to demonstrate his craft at a museum he realized there was a market for his skills. “My friends and I used to have to steal supplies, but now I’m a sponsored artist by a paint company in Barcelona,” says CES of how attitudes toward graffiti art have changed.

CES has since earned commissions from Nike and Palms Casino Resort in Las Vegas, in addition to collaborating on a mural adjacent to Miami’s Museum of Graffiti, where he was recently headlined. He finds it ironic that the artistic expression that was so strongly discouraged when he was a teenager is now a source of pride for his family. “I had no idea that if I stuck with it all those years, the whole world was gonna dig it,” reports CES.

The High Museum’s Michael Rooks notes, “The migration of some graf artists into the mainstream via museum collections and exhibitions underscores a familiarity with the language of the street that is widely recognized among urban audiences, as well as the influential role it has on global visual culture today.”  He adds, “A fulcrum point in the migration from the street to the museum has to do with an artist’s knowledge and understanding of this legacy and ability to speak with urgency and artistry to contemporaneity.”

The ultimate measure of acceptance of art is the monetary value it commands in the marketplace. In 2017, an untitled work of Jean-Michel Basquiat, who began his career spray-painting walls in Lower Manhattan, sold for $110.5 million to a Japanese billionaire at auction, eclipsing his own personal record of $57.3 million.