Whiskey Grows to be Trendy Drink 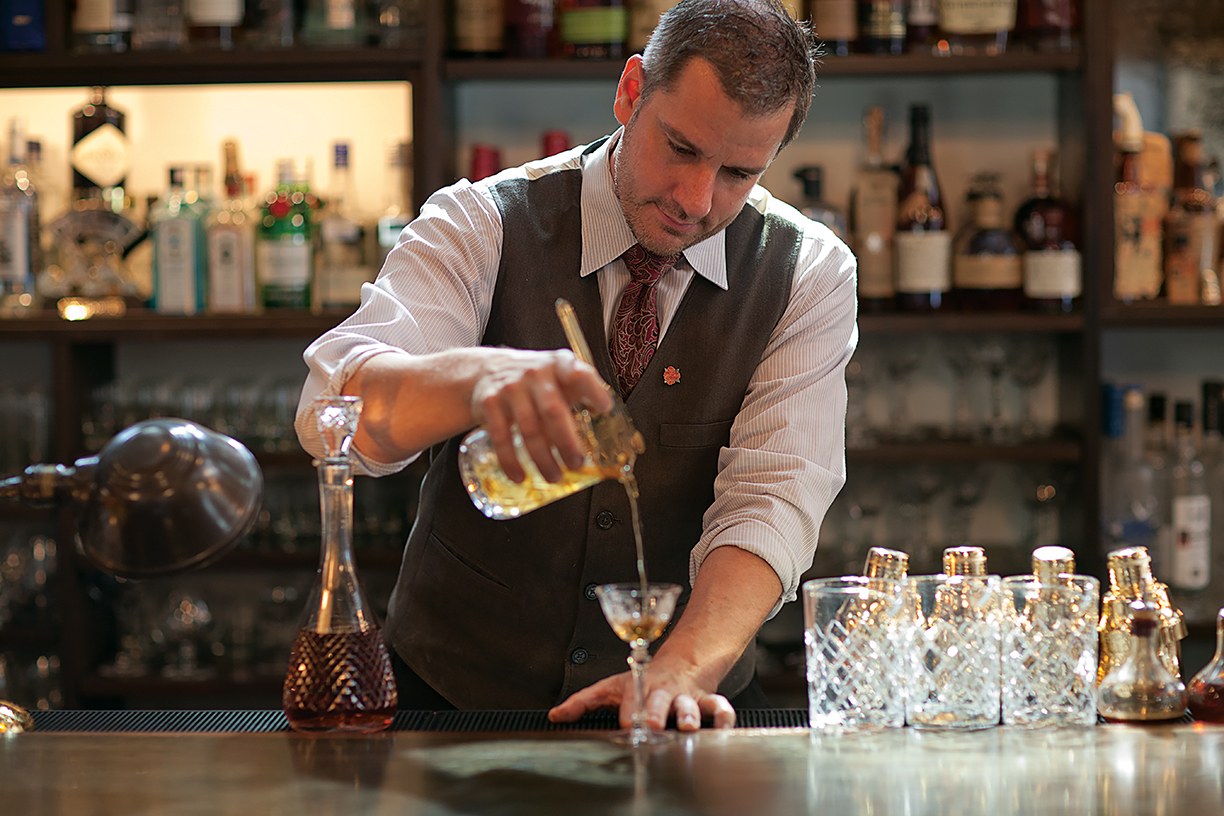 Is any spirit currently trendier than whiskey? Its popularity nationally is reflected in elaborate bars dedicated to its discovery.

The history of whiskey dates back to the 15th century and in America its popularity has endured every beverage trend from flavored martinis to craft beers. As Americans embrace this brown liquor — originally from Scotland but now produced from Bangalore to Brooklyn — as a timeless indulgence, they increasingly patronize high-end whiskey bars showcasing the spirit’s remarkable diversity. In Los Angeles, one of the bars that set the whiskey revolution in motion was Seven Grand and its success led to spinoff s in San Diego, Denver and Austin. Steve White, general manager of the downtown Austin location, reports a current selection of just under 600 whiskeys, but insists that sheer numbers are not what motivates him. “My goal is to have the most curated collection of whiskeys that our bartenders can be proud to put in front of anybody,” he explains.

In addition to rare and exotic varieties like a 21-year Hibiki from Japan or Balvenie Tun 1509 single malt from Scotland, Seven Grand offers Texas-crafted whiskeys, including Garrison Brothers Distillery not far from Austin. White reports that customers are eager to discover local brands — a prevailing trend throughout the food-and-beverage industry — and insists Balcones Dsitilling, another Lone Star State label, is competitive on the world stage. In the back of the original Seven Grand in L.A., an exclusive tasting library called Bar Jackalope pours particularly rare whiskeys and give s regulars an opportunity to rent lockers to store their own valuable hooch.

With its mounted game heads, antler chandeliers and two-story whiskey bar, illuminated in a soothing amber glow, Butcher and the Rye is a popular hangout in downtown Pittsburgh. Owned by classically trained chef Richard DeShantz, a restaurateur whose four establishments have helped fuel a hot food scene in the Stell City, Butcher and the Rye stocks 600-plus varieties of whiskey, including more than 350 bourbons. Meanwhile, the kitchen offers specialties like beef tartare with black garlic aioli and truffled egg, duck liver pâté with Sauternes gelée, panseared halibut, and buttermilk-fried rabbit.

Canon in Seattle boasts America’s largest spirit collection (4,000 labels and counting), with whiskeys consuming about 150 pages of the 191-page Captain’s List. “We have a very fiite amount of space and when it’s completely consumed that will be our number,” says proprietor Jamie Bourdreau of the lists’s upside potential.

Reluctant to express personal preferences, the Seattle whiskey authority quips, “Whenever someone asks me for my favorite it can usually be translated to, ‘What should I drink or order?'” Bourdreau explains, “The proper reason to that question, in my humble opinion, is: ‘What are you using the whiskey for, what time of day, time of year, what have you enjoyed in the past, and what’s your budget?” 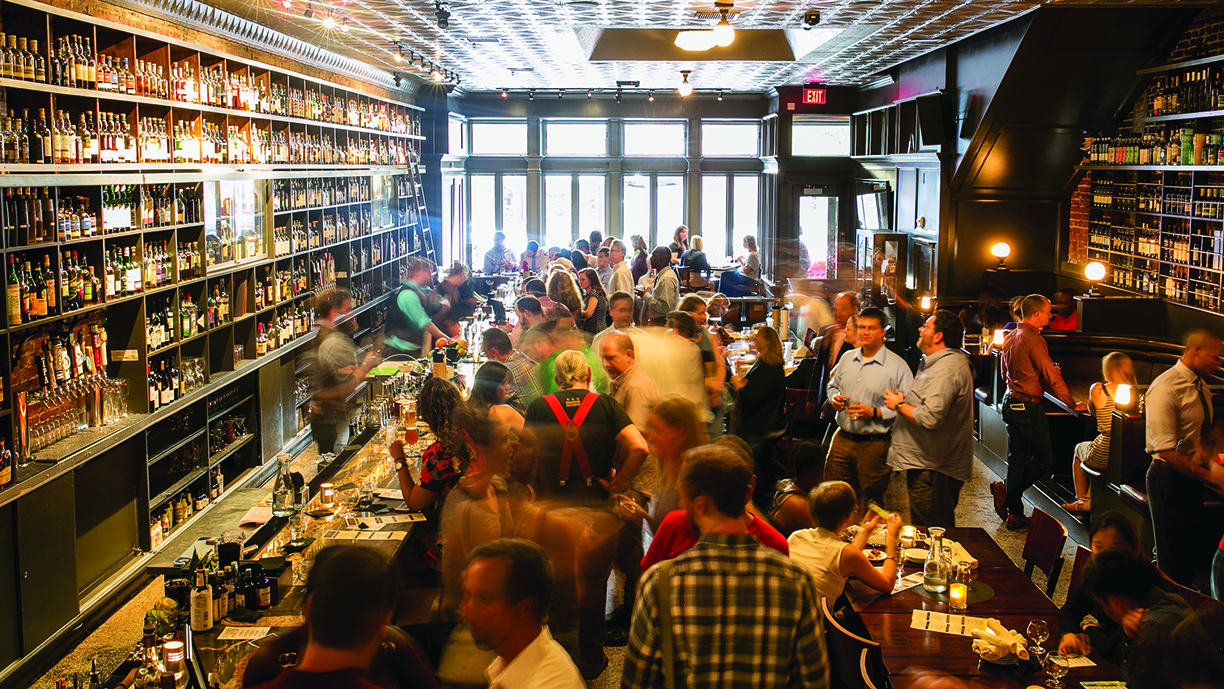 Canon’s list includes many century-old whiskeys priced in the stratosphere, such as a 1898 Canoe Club ($1,225 per pour).

Cocktails — many are memorialized in “The Canon Cocktail Book” authored by Boudreau — include classics like Sazerac and Champs Élysées, multiple mules and creative originals. “I enjoy classics and their history, but have an equal passion for coming up with new combinations and presentation styles,” reports Boudreau, who in spite of his mixology expertise insists Canon is much more than a bar. His kitchen turns out inspired dishes like seared foie gras on pain perdu with cocoa nib “soil,” sweetbread nuggets with agrodolce and barbecue sauce, and duck cassoulet.

Las Vegas’ The Whisky Attic claims to maintain the greatest whiskey collection in America, and whether or not that is actually the case, this off-the-Strip venue is certainly one of the best places to learn about different styles and explore new labels. Various tastings are offered by appointment only, and whether a customer’s interests lean toward Kentucky, Scotland or Japan, the Attic’s approximately 1,800 bottles provide fertile grounds for discovery.

As politics is often enough to drive anybody to drink, it should be no surprise Washington, D.C. offers several outstanding whiskey bars. The Next Whiskey Bar is ensconced in the historic Watergate Hotel, part of the property’s recent $125 million renovation. The space features curvaceous floor-to-ceiling shelving displaying 2,500 custom-made whiskey bottles, all dramatically and sensually illuminated.

Among the selections at The Next are a 23-year Pappy Van Winkle ($500 per pour), 25-year Macallan ($300) and 18-year Yamazaki Mizunara 2017 ($650), all excellent options for lobbyists with unlimited expense accounts. But there are whiskeys for everybody at The Watergate’s chic watering hole. “We’re shaking off the ‘appeal to only older men’ mentality,” says the hotel’s assistant food-and-beverage director Chad Gentile, insisting whiskey is a versatile ingredient that appeals to a diverse clientele. “We host men and women in their late twenties to more venerable guests wanting to relive the vivacity of the period,” he says of the capital’s cocktail culture.

Also in D.C. is the more traditional-looking Jack Rose Dining Saloon, where candlelit tables beneath a tin-stamped ceiling are enveloped by shelves containing approximately 2,700 bottles of whiskey for sampling. With 10,000 bottles a year sold by the dram, owner Bill Thomas is confident his establishment dispenses more whiskey than any bar in the world. Suggesting a demand for quality is driving the popularity of the spirit, he reports, “In the early- to mid-2000s people started paying attention to what they were consuming.”

Jack Rose Dining Saloon presents a sophisticated menu that extends well beyond whiskey-habanero wings to include ginger-glazed pork belly, scallops with black trues, and steak in peppercorn or blue cheese sauce — generally hearty fare that stands up to whiskey. Popular with diplomats, members of Congress and professional athletes, Thomas says of his diverse clientele, “On any given night a guy in a hockey jersey might be seated next to a Saudi prince.”

Greenhouse or Conservatory: Which is Better?